Congressman Tom Reed, Donald Trump, and the Invasion of the Body Snatchers

Congressman Tom Reed, like nearly all Republicans, used to distrust Russia and Vladimir Putin. He slammed his opponent, John Plumb, and President Obama during the 2016 election campaign for being soft on Russia. I managed to get snapshots of five of his Facebook posts before they disappeared. 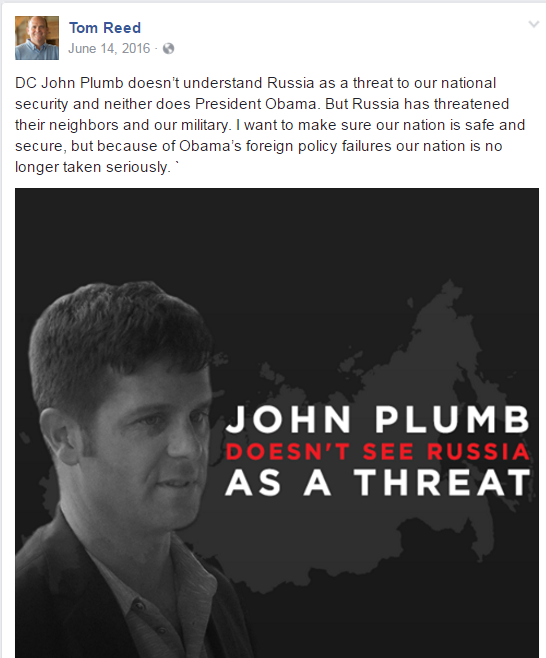 Reed's previous wariness of Russia is ironic for two reasons. The first reason is obvious. Tom Reed is one of Donald Trump's most enthusiastic supporters in New York State, and few politicians have been more deferential to Vladimir Putin than Trump. How important is Reed's support for Trump? Trump, or a high-level official in Trump's campaign, was so impressed with Reed's support that Reed was appointed as an honorary co-chair of Trump's re-election campaign in New York. And though Reed may have had minor disagreements in which he ever so softly stated that there was some distance between himself and Trump, Reed has never harshly denounced Trump. And most importantly, Reed continues to be an honorary co-chair of Trump's campaign.

So the fact that Reed supports Trump in light of Trump's failure to stand up to Putin is ironic. That Reed would agree to be an honorary co-chair for Trump's re-election campaign after Trump badmouthed the United States and gave Putin the green light to kill his opponents is perplexing. Trump might not have intentionally given Putin the green light, but how else would Putin interpret this exchange Trump had with Bill O'Reilly in 2017? O'Reilly asked Trump if he respected Putin and Trump answered that he did. What followed should have shocked Reed.

I could go into much greater detail about how Trump has undermined the West's ability to deter Russia's aggression, but I have already covered it in an open letter that I wrote to Reed last December. The only thing that I would add to my open letter is that since then we have learned that Russia has placed a bounty on the heads of American soldiers in Afghanistan. They were paying up to $100,000 per hit via a bagman named Rahmatullah Azizi and, as far as we know, Trump never raised the issue with Putin. But no matter how subservient Trump was to Putin, Reed has stood by his man.

So, my first reason for saying Reed's 2016 distrust of Russia is ironic should be apparent. But what about the second reason? Republican Senator Mike Lee tipped us off in his recent tweet.

Democracy isn’t the objective; liberty, peace, and prospefity are. We want the human condition to flourish. Rank democracy can thwart that.

It is ironic that rather than fearing Russia or mistrusting Russia, Tom Reed is supporting a President who is trying to turn us into Russia. This makes no sense. Is the Tom Reed of 2020 the same person as the Tom Reed of 2016, or is he one of the first victims of the Invasion of the Body Snatchers?